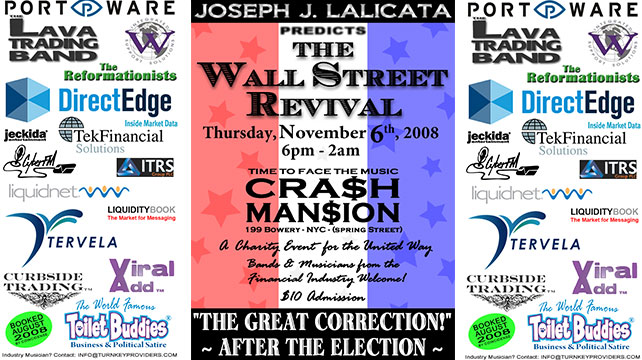 The flier read: Predicts The Wall Street Revival. On the flier I specifically put, “Booked August 2008”, the Dow Jones Industrial Average was priced at 11,659. The gig was at “Crash Mansion” in the Bowery NYC. By the time we performed the Dow Jones Industrial Average was 8,497 a drop of 3,162. The Dow fell to 6,626 a few months later. Also on the Flier were the words, “The Great Correction After the Election”, which gave a lot of people hope. This was a charity event for the United Way. The best part of the night for me was when the 2 violinists from the New York Philharmonic made good on a promise and jammed with us right after their performance at Carnegie Hall.